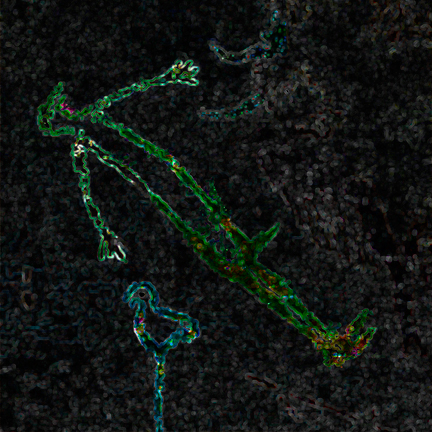 The Center for Deviant Studies presents digitally altered images of ancient cave paintings in it's ongoing investigation of the Mystery of the Cave. Plato's parable of the cave posits that those people in the cave are prisoners, seeing only a shadow of the real world. Once freed of their chains they are able to begin to see reality in the light of the Sun. From pre-historical time, mystics, shamans, outcasts and outliers have returned to the cave, not seeking the comfort of blind darkness, but rather the illumination from an inner light…

Socrates: And if they were in the habit of conferring honors among themselves on those who were quickest to observe the passing shadows and to remark which of them went before, and which followed after, and which were together; and who were therefore best able to draw conclusions as to the future, do you think that he would care for such honors and glories, or envy the possessors of them? Would he not say with Homer,

Better to be the poor servant of a poor master, and to endure anything, rather than think as they do and live after their manner?

Glaucon: Yes, he said, I think that he would rather suffer anything than entertain these false notions and live in this miserable manner.

CDS: In the face of contemporary society, it is appropriate to be deviant…

Contact the Center for Deviant Studies for more information.