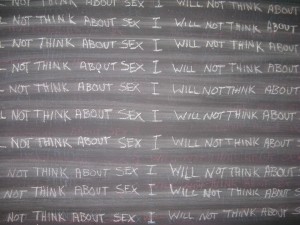 Words evoke, even when they are used to repress. Take for example the phrase "Don't think of an elephant." Despite the injunction against thinking of an elephant, what's the first thing you thought?

In a culture that, on the one hand, exploits sexual innuendo to sell commodities, and on the other hand, contains a conservative element that would deny women basic health care and reproductive rights and basic freedoms to the LGBT community, the statement, "I will not think about sex" quietly reminds us to do exactly that--think about it--and, with any luck, evokes the joyous and even sacred nature of sexuality.

James Adams eats and sleeps, among other things, in LA.