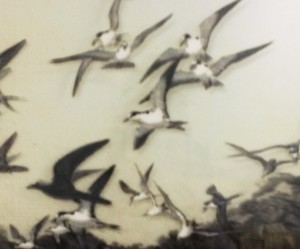 In Reef McLean presents the work

Part of a series of 6, this work recreates a diorama that has been hidden from view at the American Museum of Natural History in New York for the past 20 years. The diorama is one of four that are attributed to the Fahnestock Expedition.

McLean Fahnestock works in video, sculptural installation, and digital photographic processes. McLean selects material from the media and institutions, seeking out footage, images, and items that tap into the collective memory. She received a BFA from Middle Tennessee State University and MFA from California State University Long Beach. Her work has been exhibited and screened in galleries, museums, and alternative spaces across the United States and Internationally in Ireland, Canada, Belgium, Germany and Japan. She has received an ARC Grant from the Durfee Foundation, two Hoff Foundation Grants, and was awarded a Professional Artist Fellowship from the Arts Council for Long Beach in 2009. Her work was included in an upcoming DVD compilation of short videos by the LA Film Forum. She was a finalist for a 2012 Vimeo Video Award. McLean lives and works in Long Beach, CA. For more information on Mclean's work, visit mcleanfahnestock.com.